Speaking of wireless power transfer, MIT (WiTricity) is a very famous in this field. They are said the origin of electromagnetic field resonance or resonant inductive coupling. But were the theories they presented correct?
This principle is often compared to example of the resonance of dual tuning forks, but this was really incorrect. (An example of putting a glass of wine in front of an opera singer and breaking it is correct. The latest WiTricity WEB site describes only the example of a wine glass.)
I am still investigating whether MIT (WiTricity) himself was mistrailing mistake or reporters reporting the topic of wireless power transfer arbitrarily made a mistake.
But in explanations of the magnetic resonance or the resonant inductive coupling WEB article, it is first compared to example of the resonance of tuning fork anywhere. This is a big mistake and it is believed that the wrong recognition for wireless power transfer has expanded considerably due to the misunderstanding by this example.
This time, Green Electronics (19) is reconsidering these misunderstandings. (Link to Green Electronics No.19) 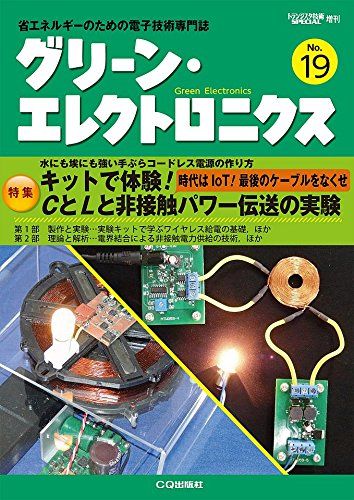 Although it is a very gentle journal, used words in the article are discreet.
Then, what is wrong with many Web articles related to the theory of MIT (Witricity) so far,

Because the secondary side resonant frequency is a function of the coupling coefficient, the resonant frequency changes as the distance between the coils changes. There were almost no articles of journal which explained in detail why about this reason. Various problems will arise if the resonance frequency changes. Any solution to that problem is also necessary. Although it is said that wireless power transmission will be put into practical use immediately, the schedule has been changed many times and is delayed, but it seems that there is this resonance frequency problem as its real reason. But, there was no WEB article focusing on this resonance frequency problem. Will there continue to be no such articles in the future?
Then, are major companies aware of? It is easy to understand by analyzing the patent that was filed by them. Patent applications about wireless power transfer have increased sharply from 2009 to 2012, and the patent office is summarizing the trend of application. (Heisei 20th Patent Application Technology Trend Survey Report (Overview) Contactless Power Supply Related Technology - Japan Patent Office)

Although we focus on the claims in terms of the resonant structure of the primary side and the secondary side, but the explanted formula of the resonance of the secondary side described in the filed patent specifications are mistaken on most of patent specifications. (That means that those patent applications of during that period have almost no real meaning!)
However, looking at recent times, several descriptions of the patent specification have gradually changed, especially in the latter half of 2016 to 2017. In the explanation of the secondary side resonance, what has been described 1-k2 has come to be considerably more. Among these several patent applications, companies that acquired licenses from MIT (WiTricity) are also included. That means ...