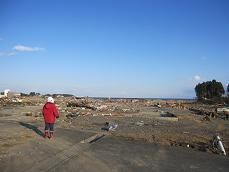 Two Nurses’ Insider Look at Kesennuma, the City Where They Were Born and Raised. (March 23)

The 3rd team left for Miyagi-prefecture on March 20th. This is the report on their operation. (It is continued from the previous report)

It seems that Kesennuma was not damaged by the earthquake with the exception of the houses and buildings along the coastline. There are still a lot of old wooden houses that survived in the mountain area. It was Tsunami that destroyed the town not the earthquake.

Outsiders feel hesitatant when they try to shoot the photo because the object they are trying to shoot is only a tragedy, nothing else. However, Ms Sugawara, nurse, who is originally from Kesennuma, takes photos without hesitation as she walks through the town. “The Dermatological clinic that used to be here has drifted to the other side”, she said, pointing to the clinic that is lying on its side and with only the second floor surviving. Accompanying Ms. Sugawara is SHARE nurse, Ms. Mori, who also tries to take as many photos as she can of the disaster-hit area. It seems that she is trying to take photo of her hometown where she has returned after a long time. The scenery is totally different from what she remembers. I wonder why she cannot help taking photos… Is that because this may be her last to chance to remember so much from the city she is from?

On the Road to Kesennuma-city (March 23)

The 3rd team left for Miyagi-prefecture on March 20th. This is the report of their operation. (It is continued from the previous report)

On Wednesday, March 23, the 3rd team left the temple they were staying at (Collaboration: SVA) and left for Rikuzen Takada. They picked up Dr. Sawada along the way who was working with NICCO and headed for Kesennuma.

In Kesennuma, they collected information at the municipal office that is playing an administrative role as a disaster countermeasures office.

Surprisingly, we found that Mr. Sugawara who was a former Japan Overseas Cooperation Volunteer had come to offer his assistance and had opened a medical consultation room at the office. There was also a doctor present. Right after the team explained the aims of SHARE being there, he immediately said, “Let’s go and see a small scaled evacuation centers together.” After that, a medical doctor, a nurse and the SHARE staff took the medical equipments separately, and walked to a local community center nearby. It was further than expected and a steep slope; but we experienced the inconvenience of those who had to walk to the evacuation center from home. Bicycles used to be a necessary item for their daily lives. During this assessment of the evacuation center, we experienced some transport-related troubles such as picking up an elderly people with leg problem who was hitch hiking and lifting the car that ran off the road. There are a lot of people who have lost their cars due to the tsunami, there are also those who cannot leave due to lack of petrol.

At the community center, five adults and a mother with small children were evacuated from their home. Immediately, a medical doctor at the city hall and Dr. Sawada consulted them. Ms. Sugawara, nurse, started listening to the entirety of their lives. She asked them whether they were experiencing any cold symptoms, whether they had any chronic disease, whether they have sufficient medicine. Luckily, the electricity was reactivated but they only had limited amount of bottled water distributed and mountain runoff. As for gas they were using propane gas. In this area, fortunately, collaboration within the community still existed and the mayor of the ward cared deeply about this center as well.

On our way back, we experienced a steep downhill and as we were about to enter a disaster-hit area, suddenly a door of an apartment opened and a lady called to us. She informed us that her daughter was sick. The doctor immediately consulted her and found out it was only a pollen allergy. We realize that people may be over sensitive because of the outbreak of the flue.

But this situation raised a question, how did she find us? Has she, perhaps like many others, been waiting for a doctor to pass by inside the house?