Hi! My name’s Sam and I’m from America. I grew up in Philadelphia, went to university in Chicago, and lived in New York City after graduation. For the past few months, I’ve been traveling and volunteering in Asia. I started my trip in Taiwan, went to Vietnam to teach English, and now I’m in Japan. Specifically, I’m on Ojika Island, volunteering at Shimayado Goen. Ojika is a small island of about 2,500 people in Nagasaki Prefecture. 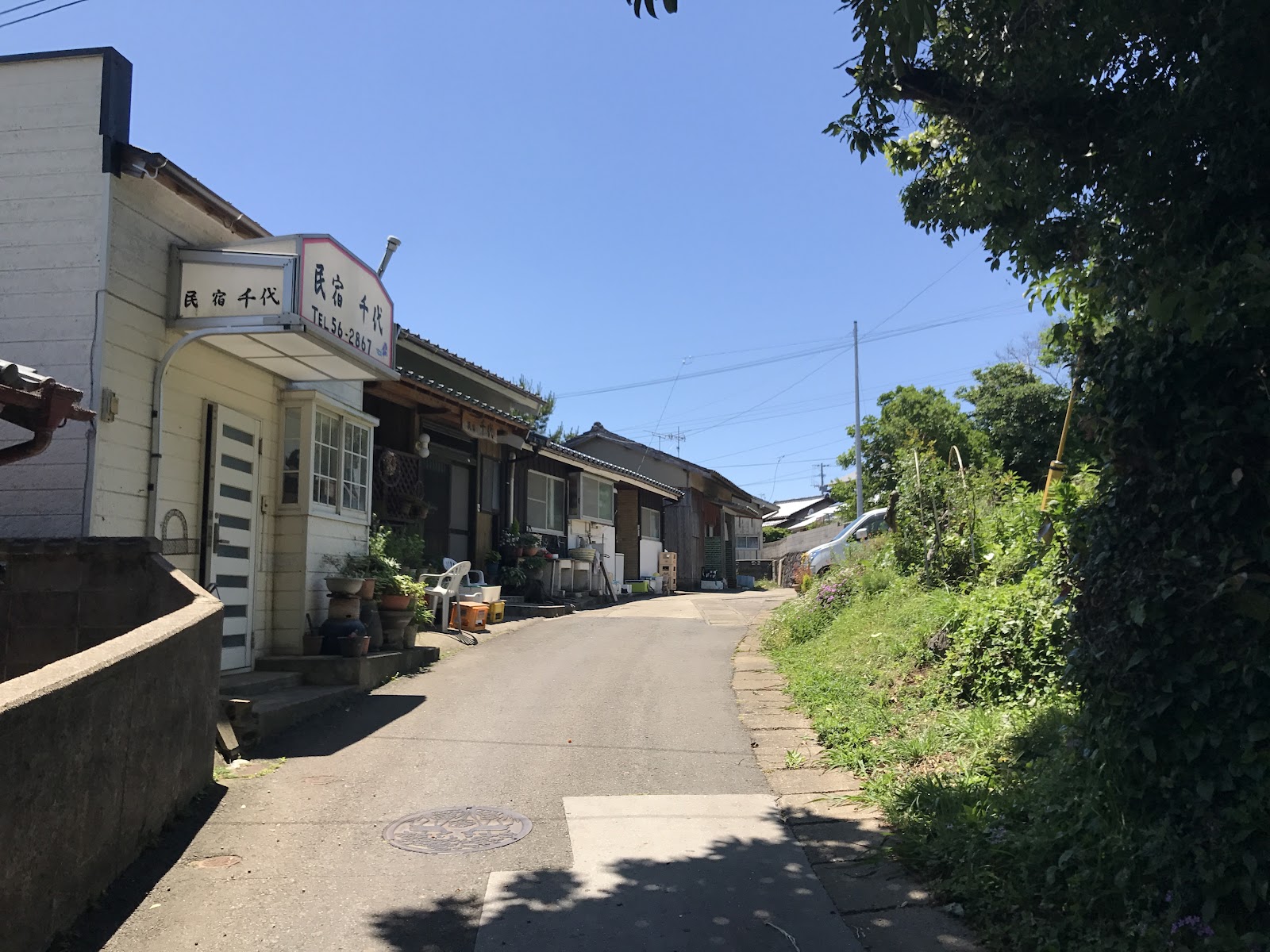 At the moment, Ojika is not a popular travel destination for foreigners. While its tourism industry serves Japanese travellers easily, it is only beginning to expand towards attracting English-speaking guests. I’m always looking for opportunities to live like a local when I travel, so I’m grateful to have stumbled across Ojika on the internet.

During my first day on the island, I was surprised to find how well the town preserves its history. Most of the buildings and homes haven’t been renovated. It’s amazing to see so many old, traditional Japanese houses. 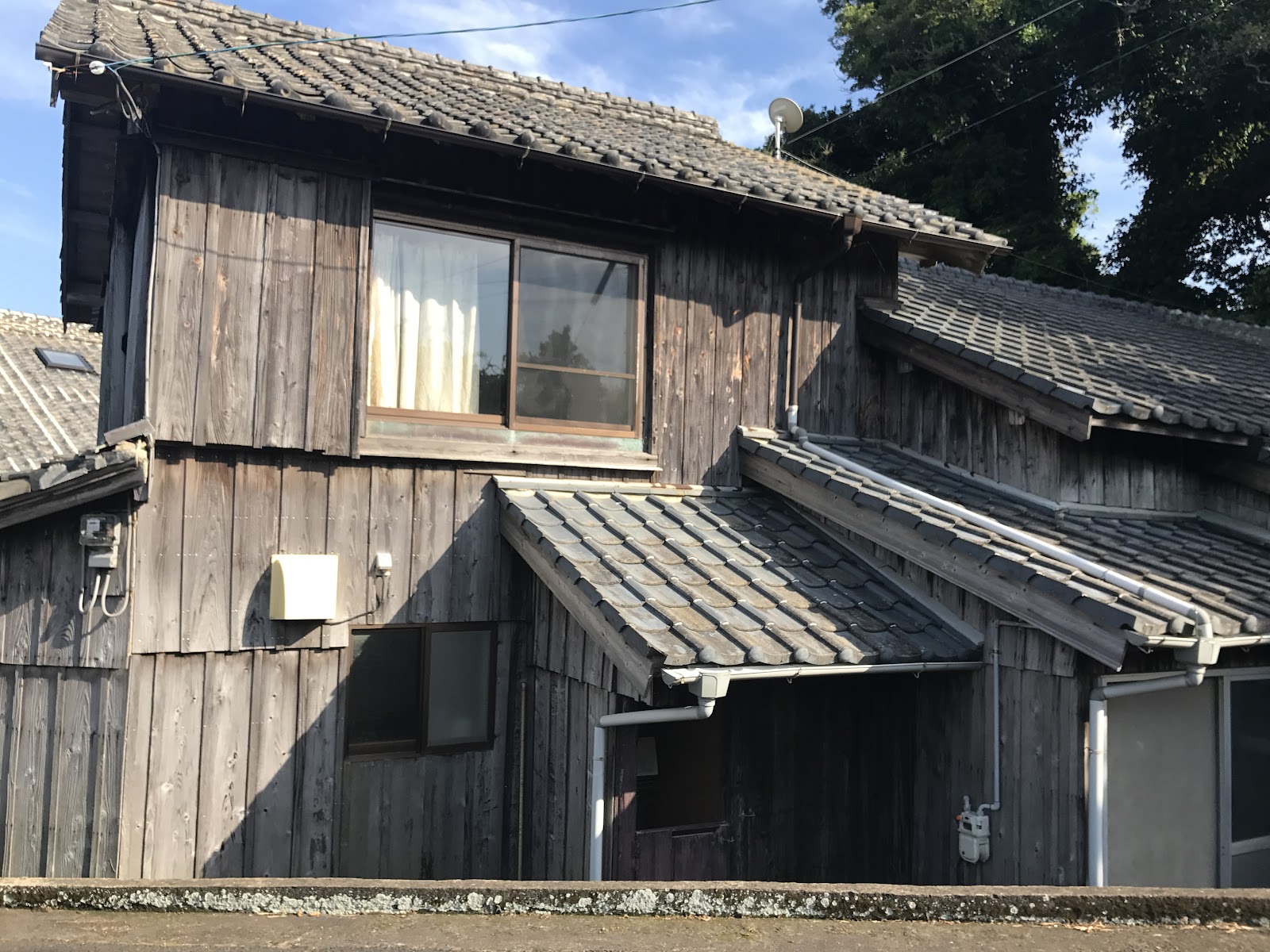 In a small coffee shop on the main shopping street, I felt like I had stepped back into time. I’ve always wanted to time travel to the past, and Ojika, in some ways, gives me a taste of what it would be like. While walking around town in the Fuefuki shopping area near the harbor, the sun was shining, there was a perfect breeze, and everyone greeted me or smiled as I passed. The positivity is palpable in the atmosphere. 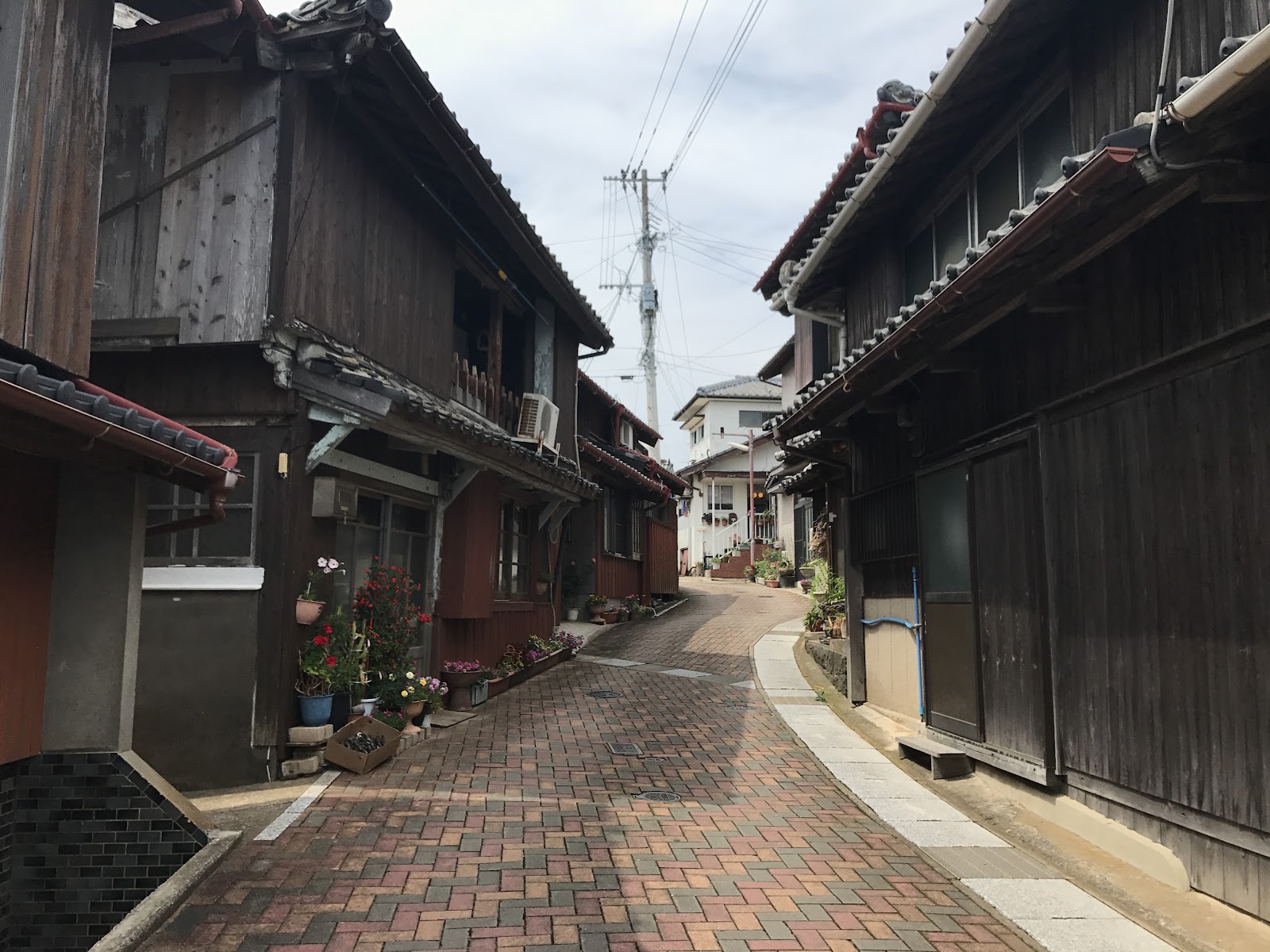 At Goen, the food is incredible. The fish in Ojika is probably some of the best in the world… So dinner at Goen is very “oishii” (delicious.) I can’t wait to eat more of the food and explore the island. 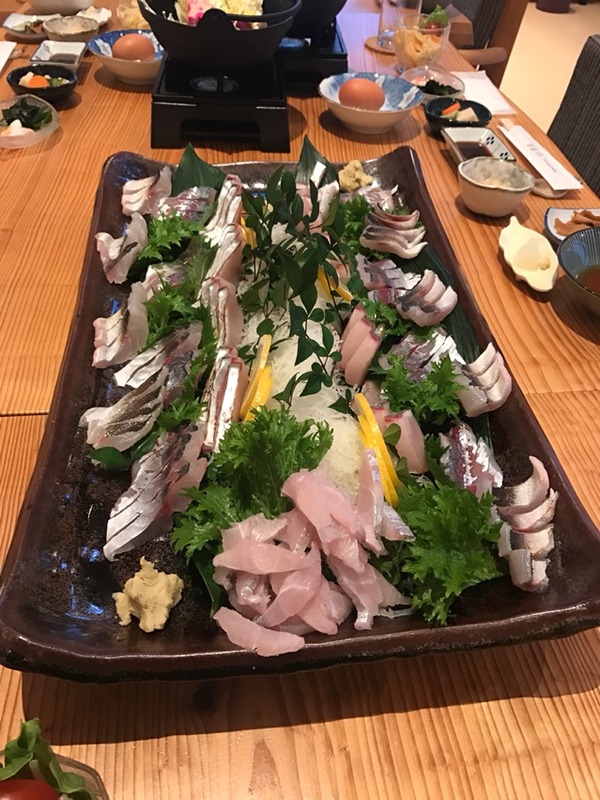 Taiyo, the owner of the inn, showed me a bunch of places on the map where I can go, like a red sand beach and a mysterious  “pot hole.” One of the main attractions nearby is Nozaki Island, a deserted island where Christianity once thrived in secret while it was forbidden in Japan. The last resident finally left a few years ago, and it’s set to become a UNESCO World Heritage site soon. I look forward to seeing everything! 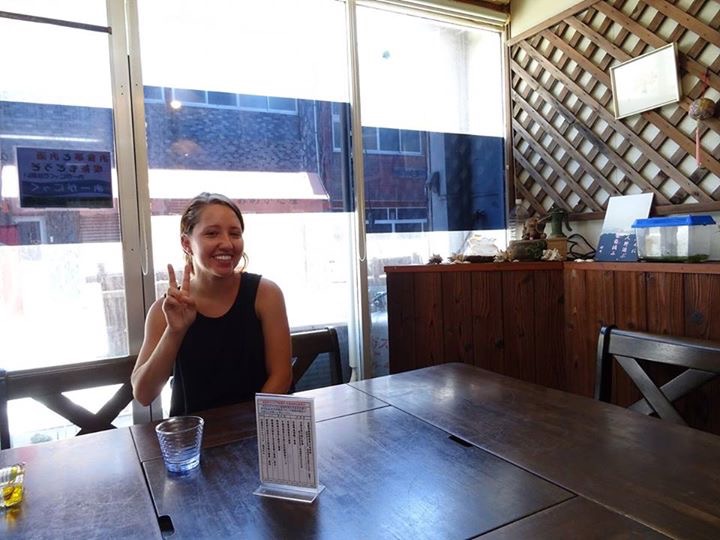 Bicycles are free to borrow when you stay at Goen, so today I hopped on one and went exploring. Biking is the best way to see the island, since you can cover a lot of ground, the breeze is nice, and there are very few cars on the roads. I felt so free with the wind blowing through my hair. I don’t think I’ve ever been under a sky so perfectly clear and blue. 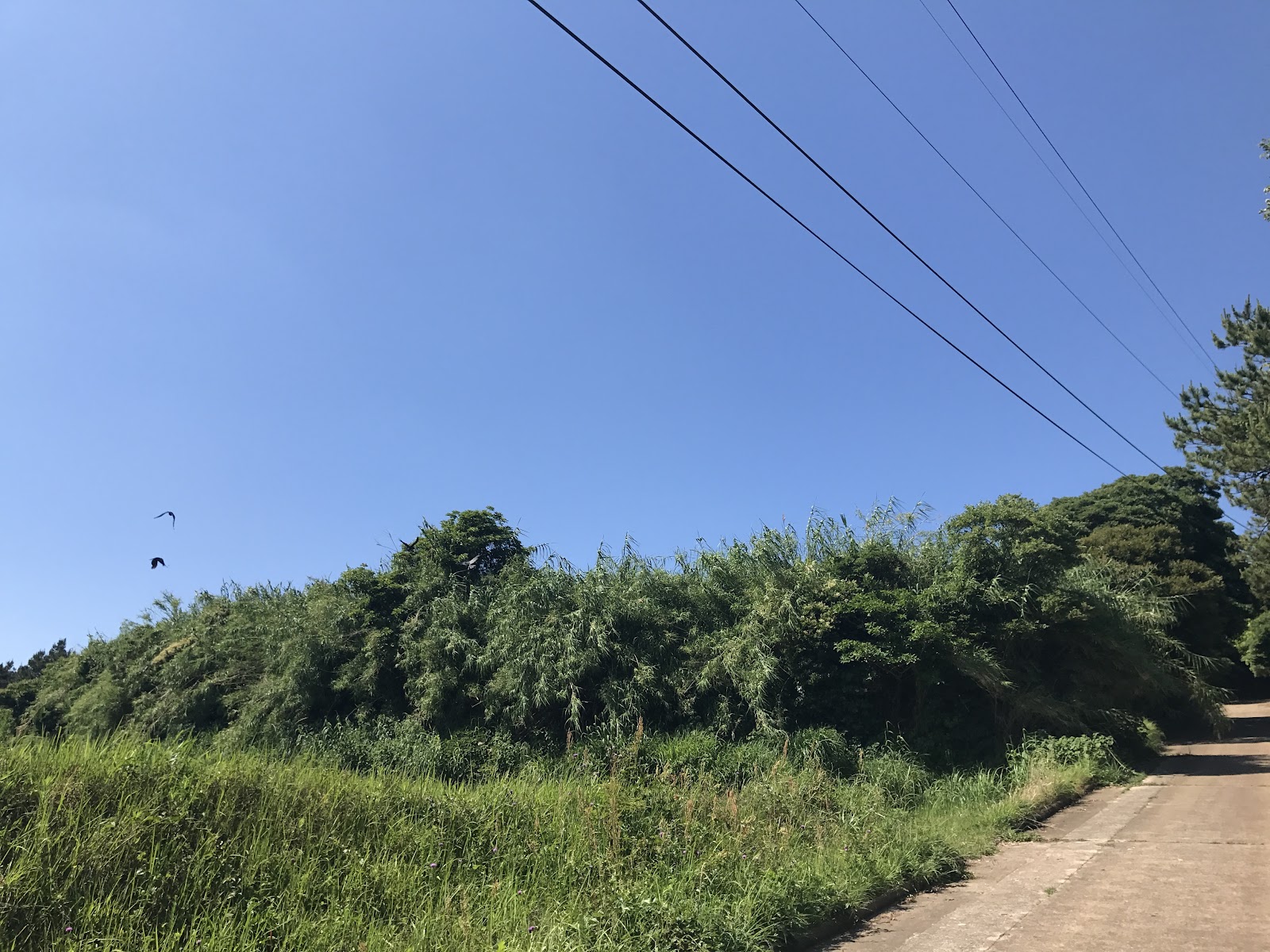 I got an English-language map of the island from Goen and marked the places I wanted to go. I first went to Eidan, a grocery store, to pick up some sweets. I tried to buy mochi, which are sweet rice cakes and my favorite Japanese treat, but I can’t read Japanese and accidentally bought some red-bean filled marshmallows... They were also tasty, though!

I got back on my bike and started riding towards Mount Atago. When I stopped on the side of the road to check the map, I realized I had left it in Eidan. Luckily, I had my phone and checked Google Maps, since I’m a bit directionally challenged. I tried riding the bike up the small mountain, but that only lasted a few minutes. I was panting and running out of leg strength, so I got off the bike and pushed it up the hill. That was also tiring. I recommend leaving your bike at the bottom and walking up! 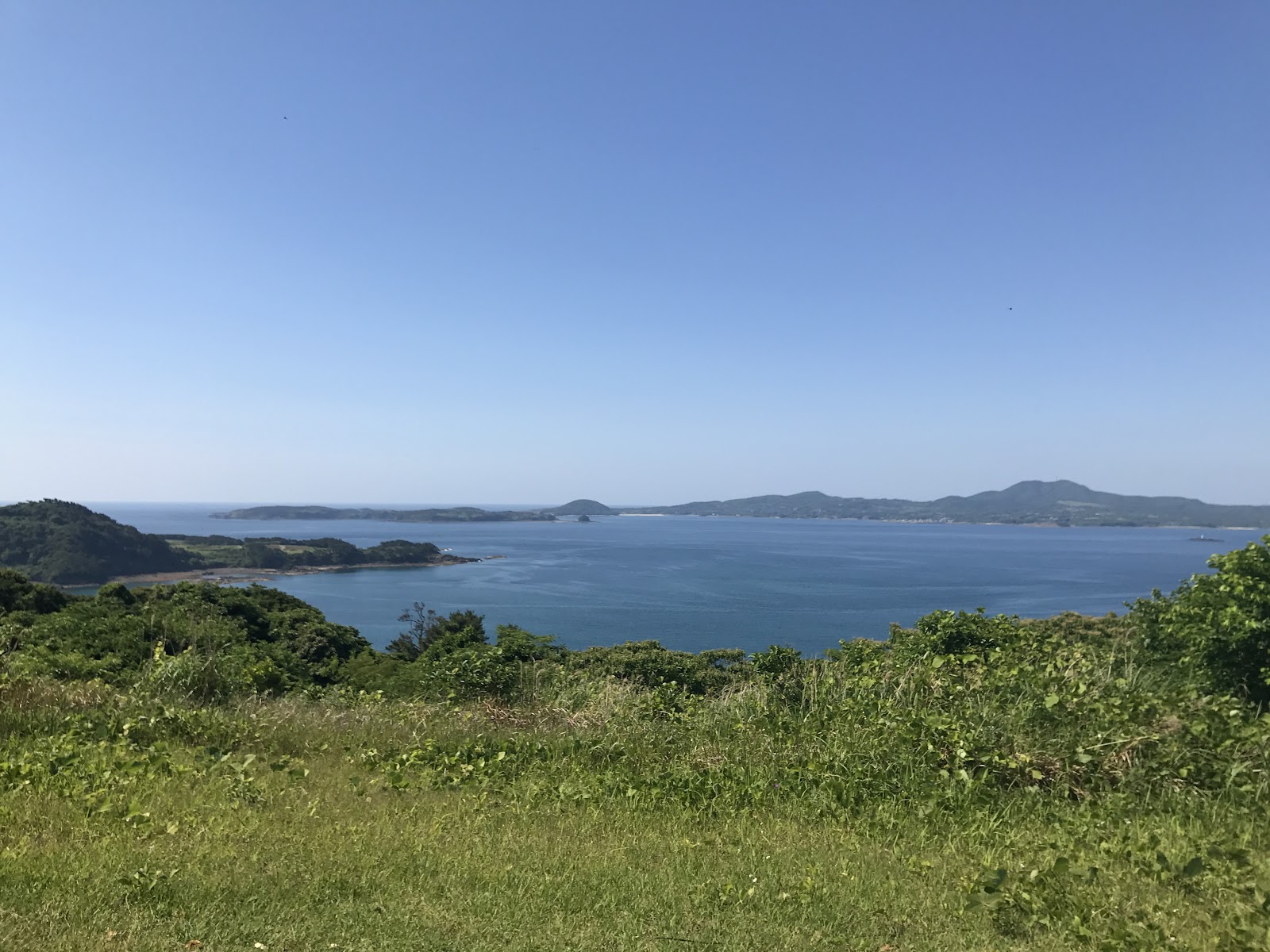 Once I got to the top, I walked around, laid down in the grass, and took some photos of the nice blue-and-green view. Then, I got back on the bike and prepared myself for the descent. I squeezed the brakes as hard as I could, but it made a terrible screeching noise -- sorry Ojika neighbors! -- and I flew down the hill. I really felt the wind blowing through my hair this time!

As I headed to the Ojika Airport, which is no longer in use, I discovered I had a flat tire. But, within two minutes, a woman in a truck stopped beside me, put my bike on the flatbed of her truck, and gestured for me to get in the truck. I couldn’t understand anything she was saying, but she was very adamant about helping me get the bike fixed. She took me to a repair shop and had the tire repaired immediately. There are so many friendly people on Ojika. After thanking the woman and the repair shop staff, I went back to Goen to rest and decided to take the bike out again another day. 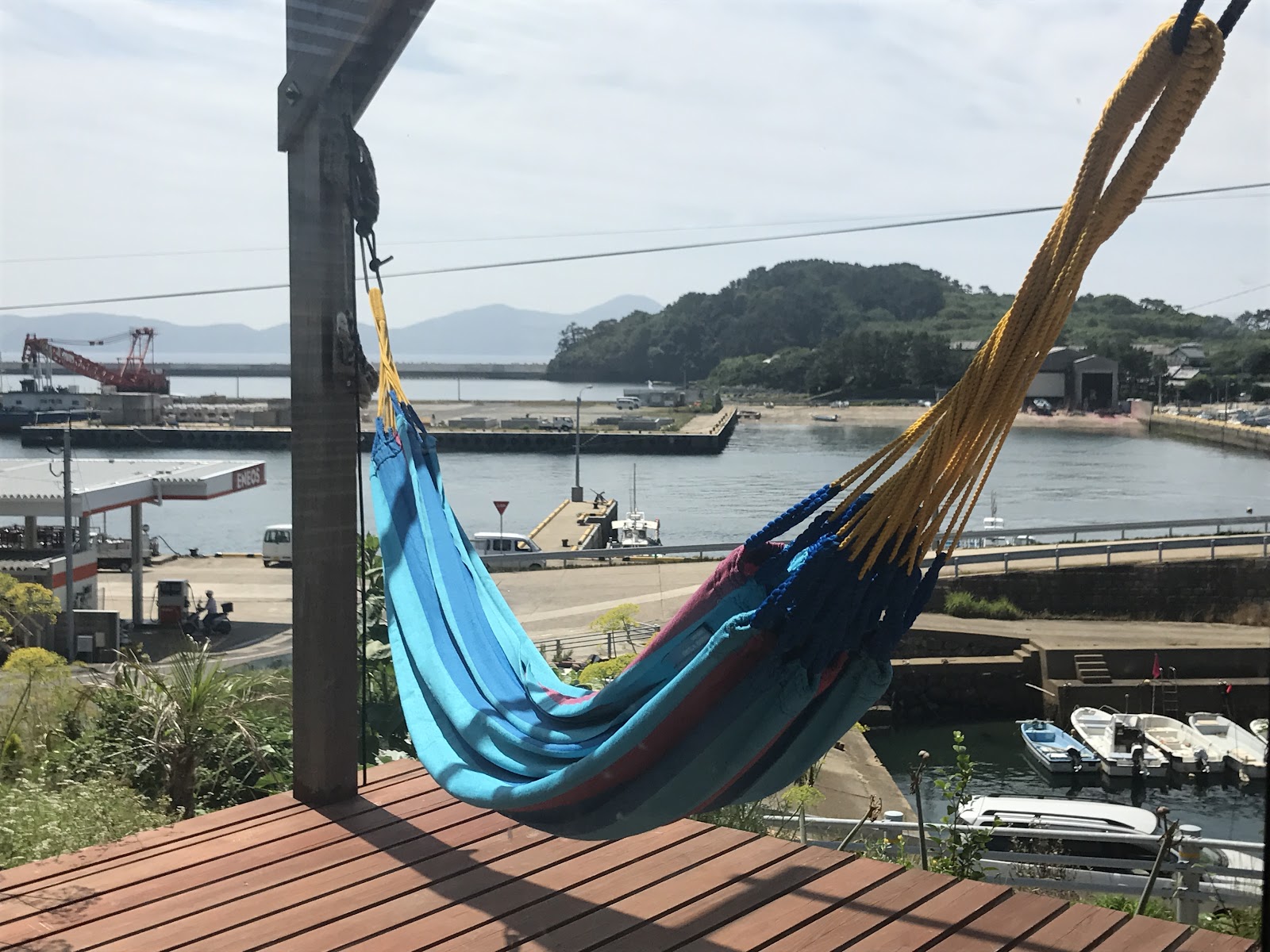 Today, I went on another bike ride to see the beaches. I got a new map! Kakinohama is a classic yellow sand beach. It’s said to be the most popular for swimming. 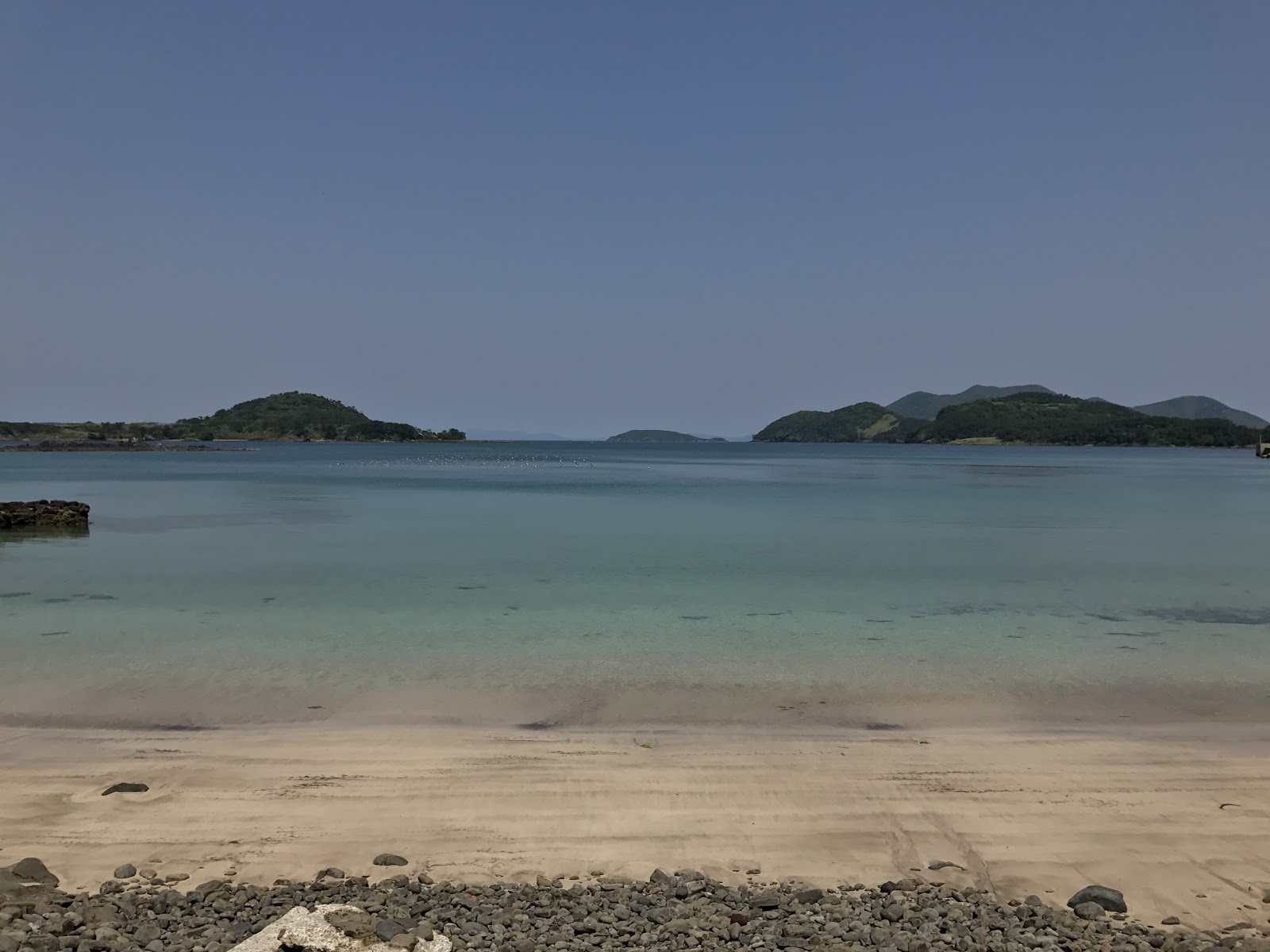 I dipped my toes in the water to test it, but it’s too cold now (in early June) to swim. When I was leaving, I saw someone bringing a SUP board -- I’d love to do SUP here! The water is calm and beautifully clear.

Next, I went to Goryodaki, which is nearby Kakinohama. This tiny beach set into a large cliff is one of the most naturally stunning sights I’ve seen in the world. 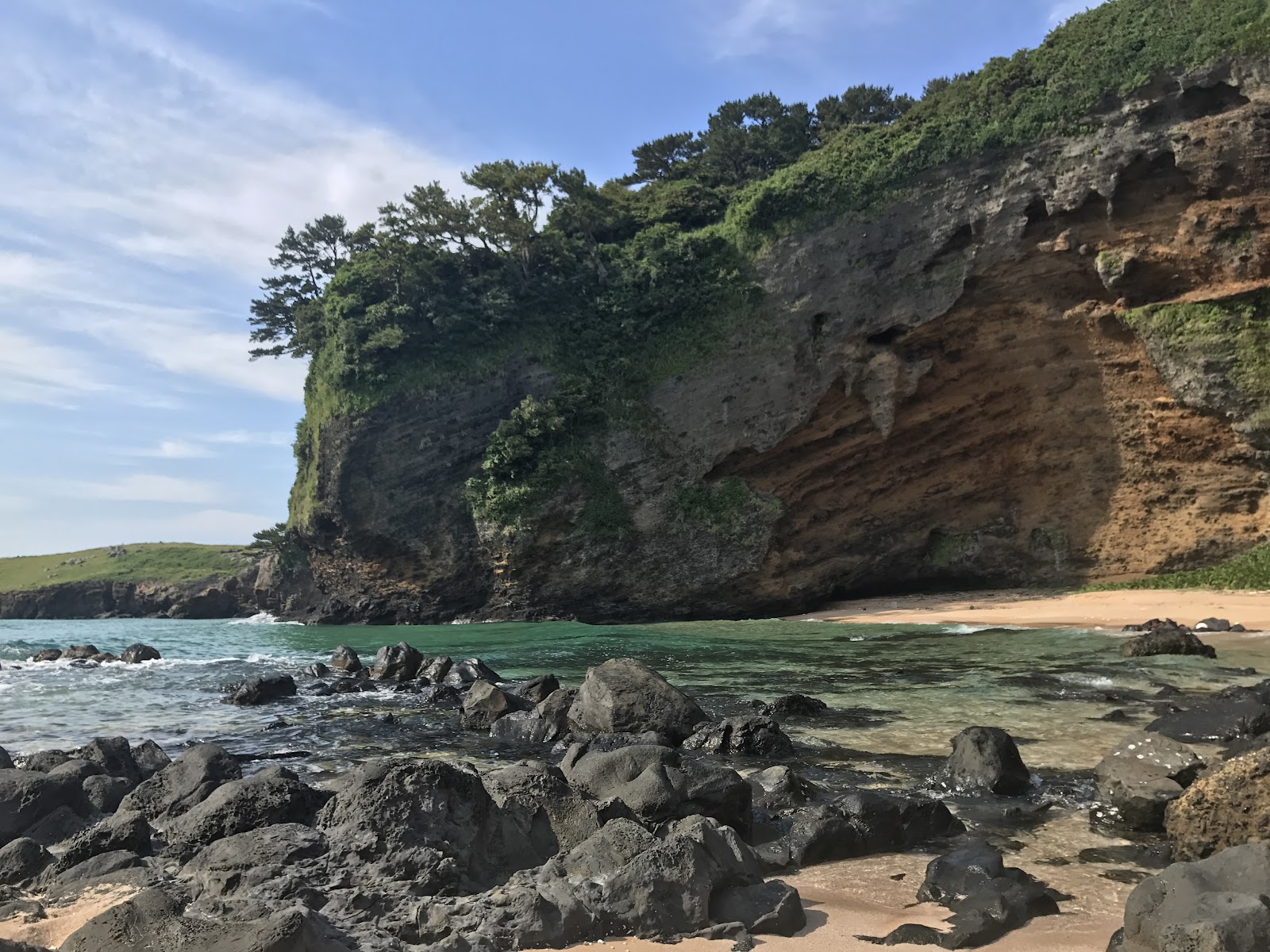 The sky was clear blue (as it often is here,) the water was sparkling with the reflection of the sun, and the green grass completed the colorful image. I took so many videos as I climbed over the black rocks in the sand and onto the grassy hills. 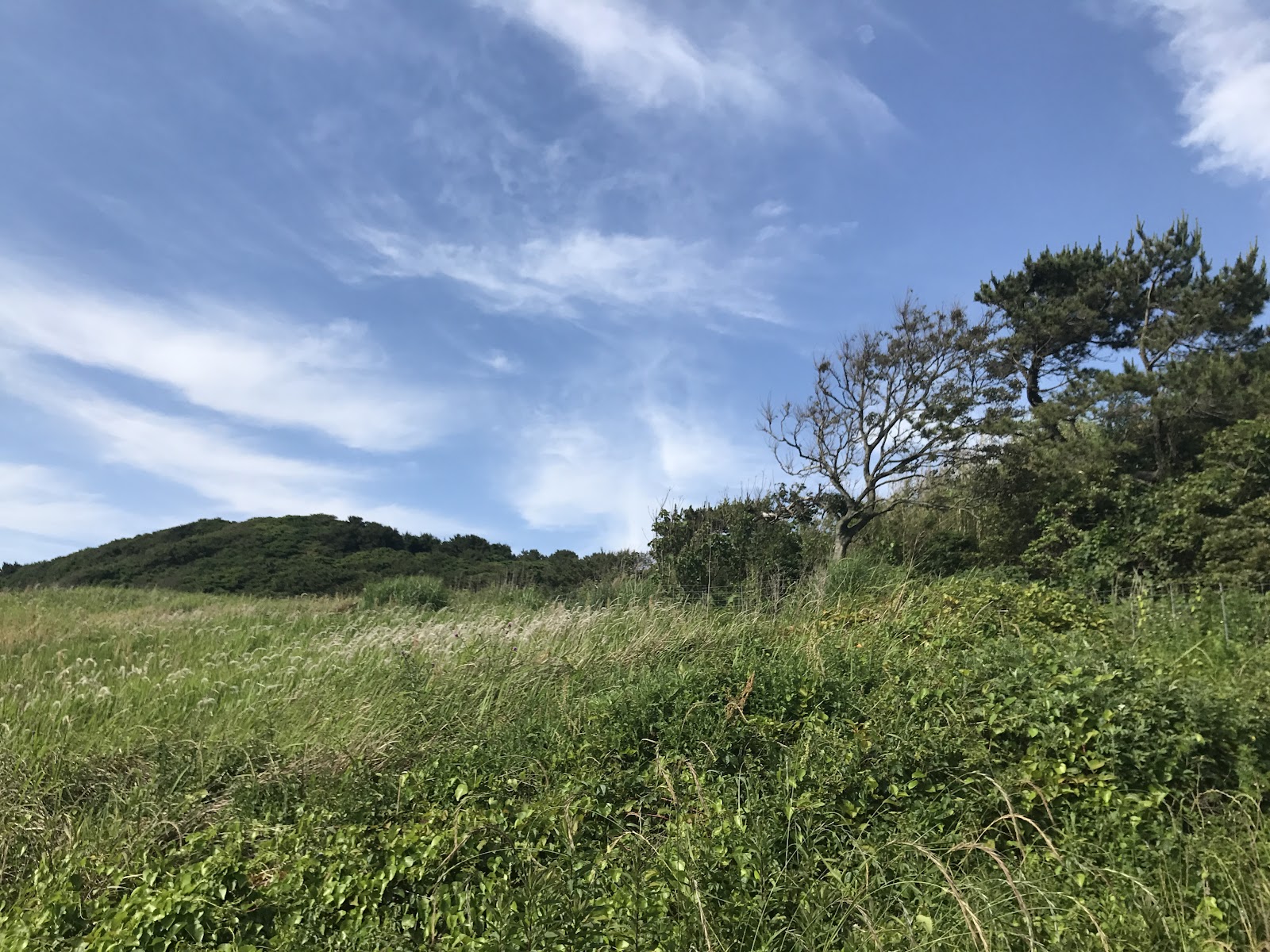 In other incredible “sightseeing” spots around the world, there are crowds of tourists. Today, at Kakinohama and Goryodaki, I was the only person there. Tourist spots with high traffic inevitably diminish the quality of the nature overtime… Luckily Ojika doesn’t have that problem.

On my way back towards  Goen, I decided to forgo the map and take some of the small roads and paths around the island. There’s a lot of farmland and rice fields, and I wanted to venture off of the main road. I found cows! 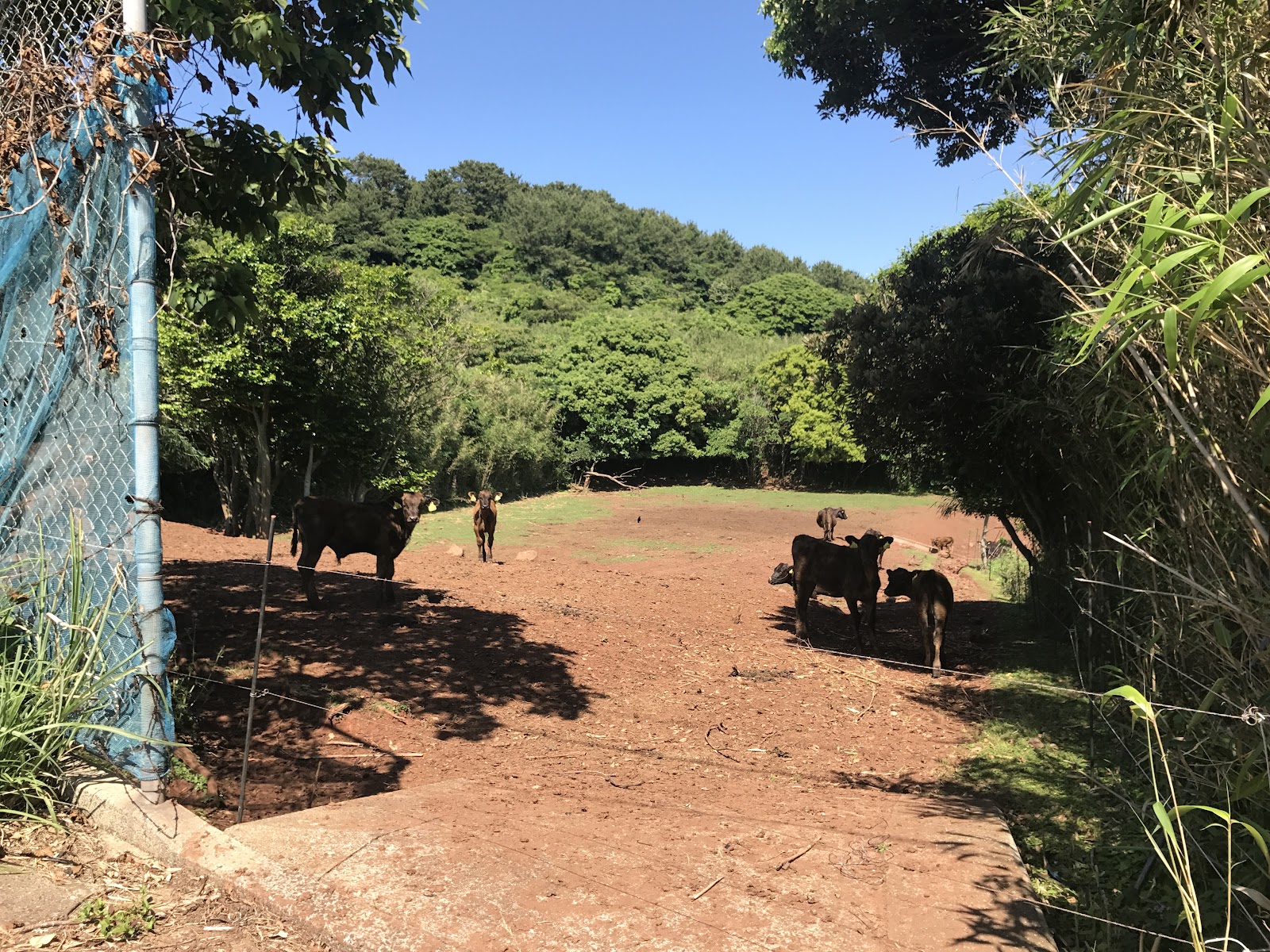 In the evening, at the Melody Box Karaoke Bar, I met some of the local people. Many of them have a good sense of humor and we laughed a lot together, even though we weren’t speaking much of the same language. I talked to two local women who spoke a little bit of English. One of them handed me a blue lace top and asked me to wear it. I was a little confused as to why, but I put it on. Later, as I was about to leave, she told me to keep it as a gift. I’ve received a few gifts since arriving on the island! I also met a local man who worked as a chef internationally for several decades, and he invited me to enjoy lunch at his house the following day. (I did, and it was delicious!!) 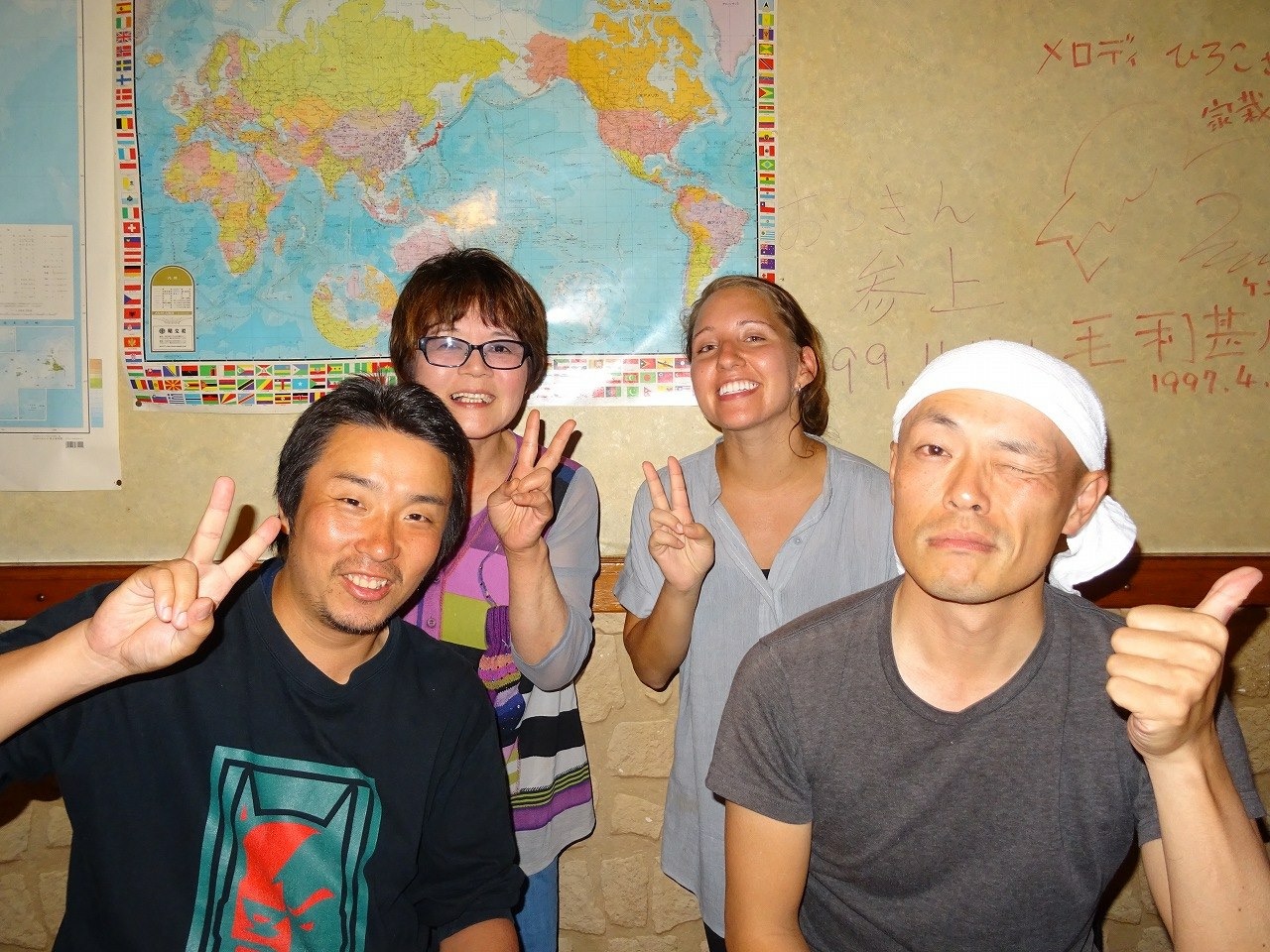 Today, Hiroko (the owner of the Melody Box) picked me up for lunch. We went to the sushi place on the Fuefuki shopping street. Did I mention how “oishii” (delicious) the fish is on Ojika? 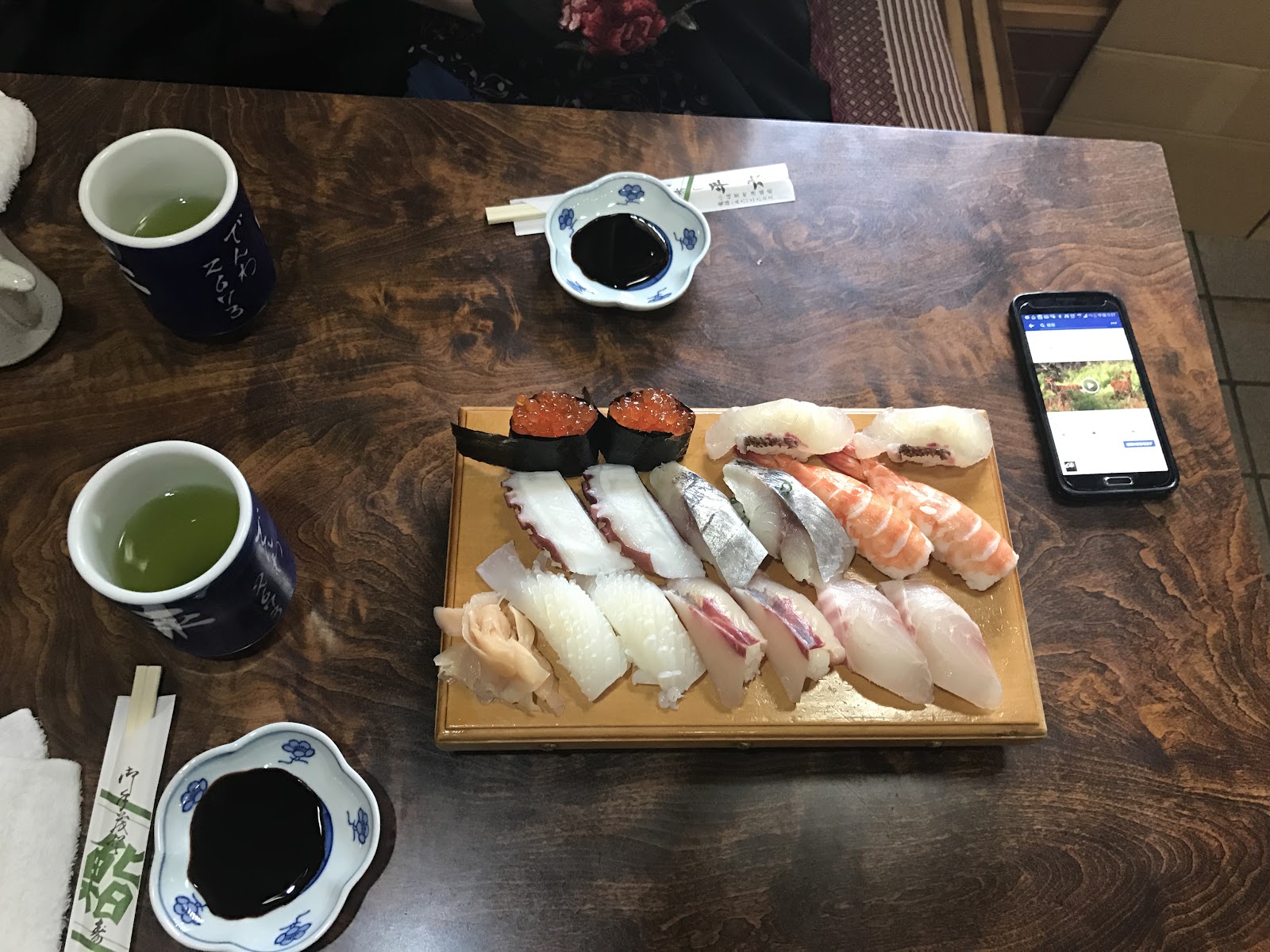 There were all different kinds of fish, and I ate so fast. Once I was starting to feel full, we were given another big plate of sushi. This time, they were vegetarian makis (rolls) and the yummy ones with tofu skin. I was definitely full.

After lunch, Hiroko took me to a nearby house that has old Japanese objects on display inside. When I walked in, a woman told me in English, “old Japanese things!” Of course I couldn’t read any of the plaques for the objects, but Hiroko and her friend Ryoko translated some things for me. There was a section upstairs with artifacts from World War II and old journals from schoolkids. Besides the objects, the house itself, like nearly all of the houses on Ojika, was in its original state. Built of stone, wood, and natural materials, the houses give Ojika a special, old-fashioned feeling. It’s clear that the island and its people value nature and don’t care about materialism or ostentation. Three women were sitting on the floor at a Japanese-style low-to-the-ground table, watching old home videos of the traditional dances that they used to perform when they were younger. They were having a good time watching their younger selves on the screen and eating fresh fruit. The lifestyle on the island is calm and relaxed. No one seems to be stressed or angry or worried.

In the evening, Hiroko drove me and Ryoko to Madera Island, which is connected to Ojika by a short bridge. We stopped at the “Tori” gate, and Hiroko took photos of me. She documents every day with her camera. 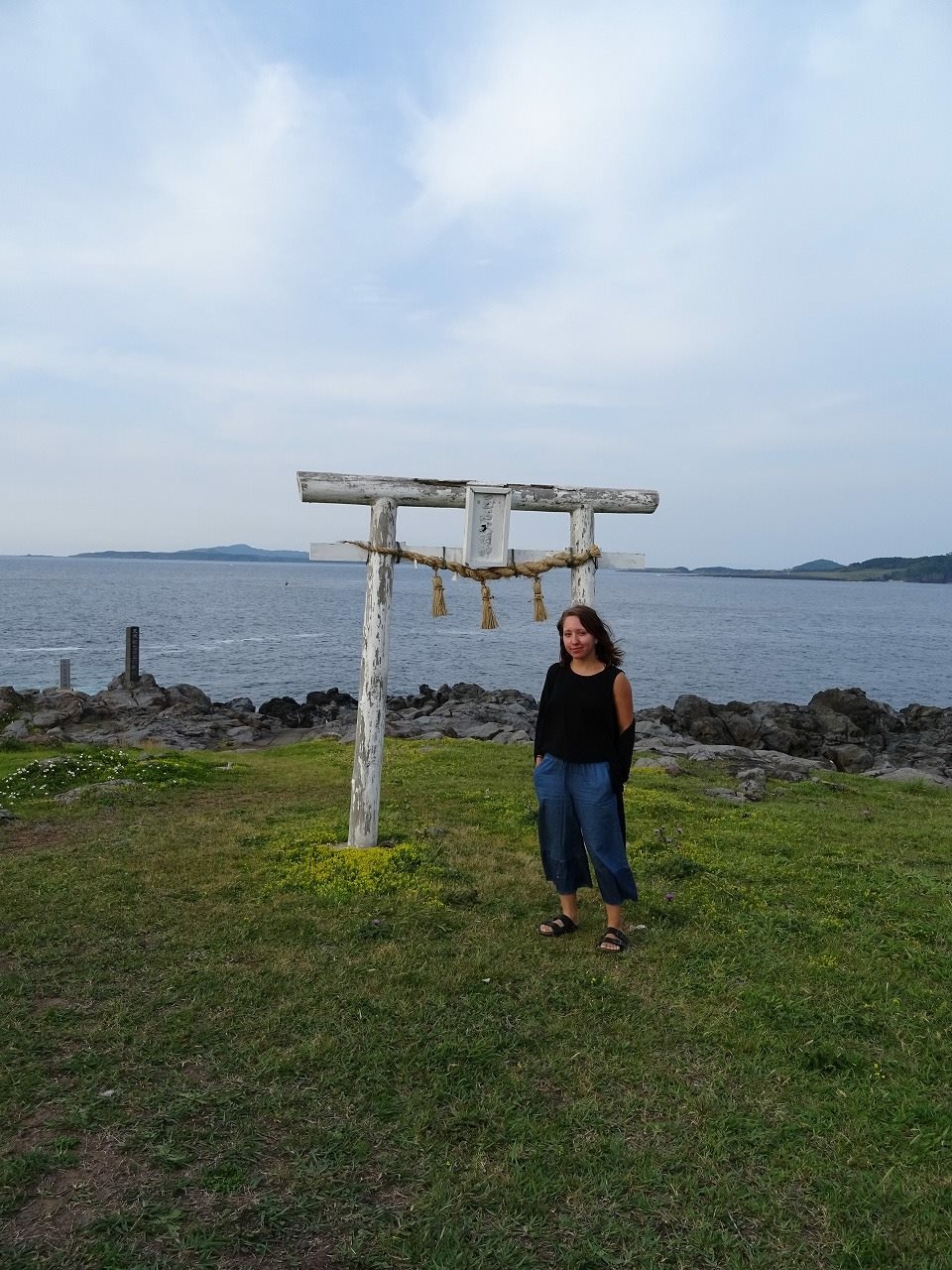 There’s a “pot hole” here that has been formed over thousands of years. Apparently it’s the second largest in the world. There’s a giant stone inside the hole. It’s kind of freaky. How did it get in there? 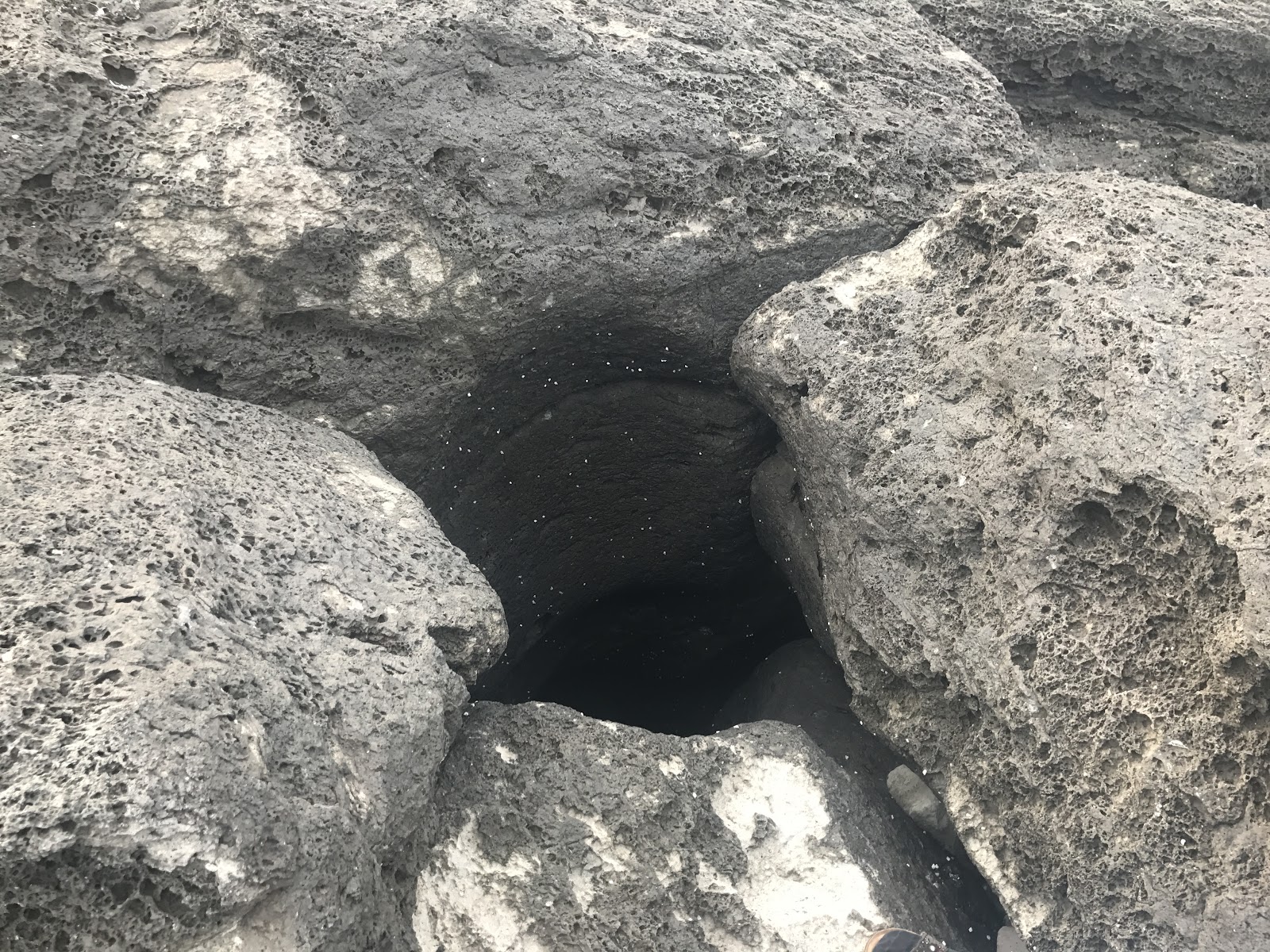 The area around the pot hole is really beautiful, too, especially as the sun was beginning to set. (Do you notice a pattern? Everywhere in Ojika is beautiful…) 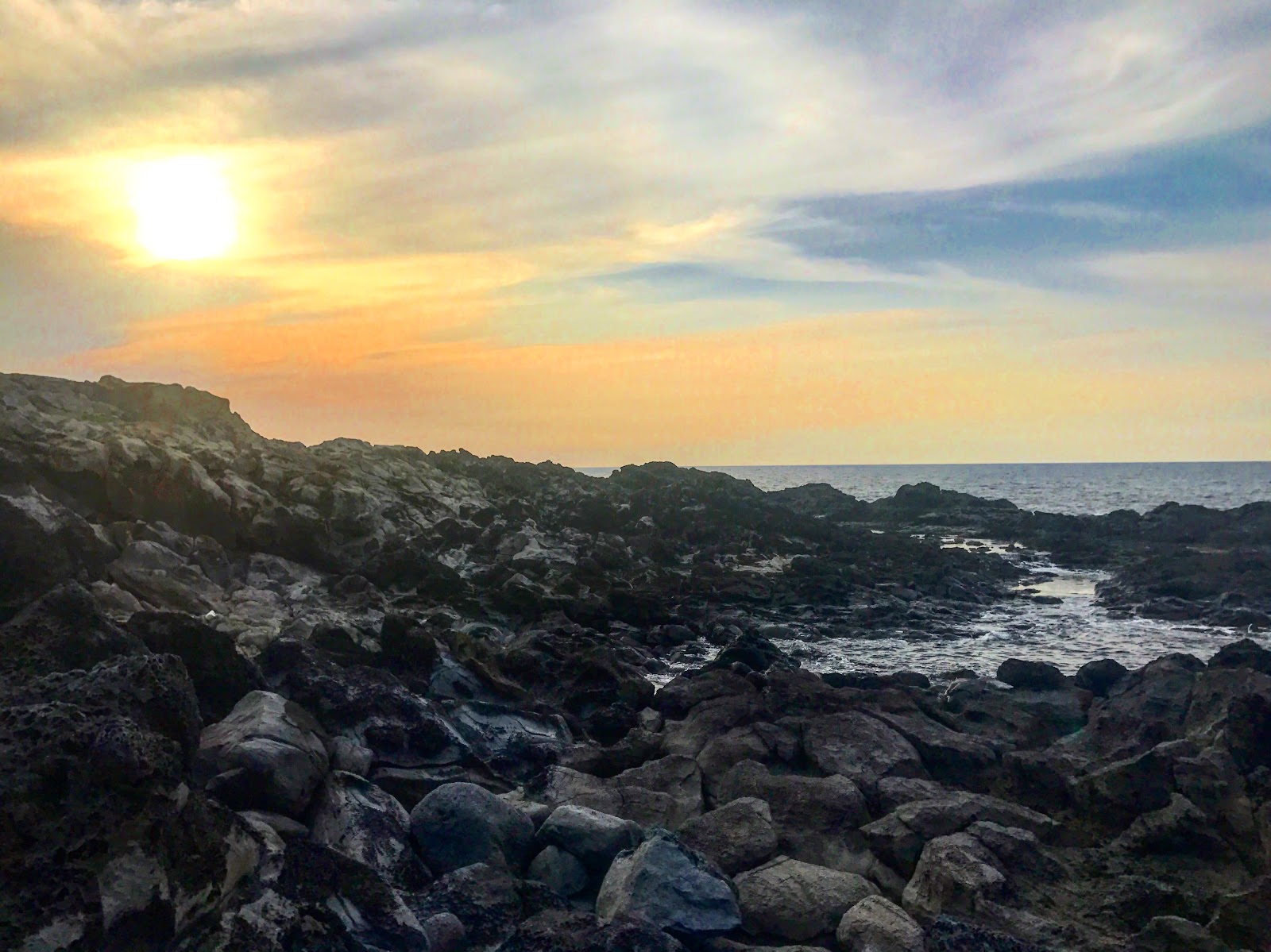